Horizontech have been ruling its kingdom but now it is time for a new reign to start. Will the Falcon 2 prove to be a new dynasty for the company or will this son be wayward?

Horizontech have been the biggest name in vaping tanks now since the launch of the Falcon tank back in 2018 and rightly so. The original Falcon took stock coil tanks light years ahead of where they currently were with the wood pulp wicking that massively increased flavour over everyone else. Even the release of the mesh coil for the tank was right up there as one of the best sub ohm tanks you could buy. So it was no surprise that the Falcon King was released last year bringing new coils and a much better design to really offer the perfect way to vape, even if it proved to be a DLC rather than new release. Not all coils hit the mark over the 18 month life span seemingly the more coils they added the worse the performance was. It didn’t stop the M1 coils still standing up to any others released long after them. So the wait for the follow up has been 2 years in the making, what could Horizontech do to top the very best, the answer may not surprise you. We will get talking about the tank in greater details soon enough but first let’s go through the specs first. 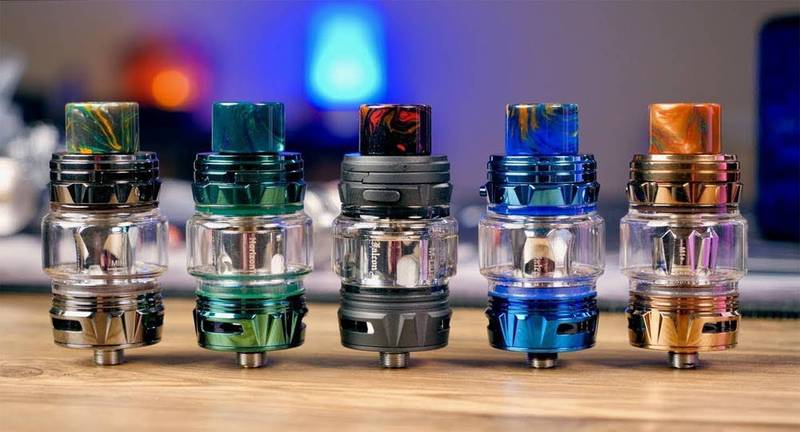 About the Horizontech Falcon 2

The Falcon 2 is the latest release from Horizontech and brings a number of new changes to the design to try and offer a much improved vaping performance. The tank itself is a 5.5 mil capacity tank with bubble glass provided and with a 3.4 mil straight glass option also. The tank is a 25mm diameter tank and comes with bottom adjustable airflow and top fill system. The tank comes with a brand new sector mesh coil that is rated 0.16 ohms and comes with wood pulp and cotton for wicking. The top fill is a slide back option revealing a small kidney hole shape and comes with a 810 drip tip as standard.

The tank itself differs from its predecessor through the new coil system that has been implemented. Instead of a screw in base as before, the tank features push in coils making the change of coils much easier than ever before. The coils are not compatible with the former tanks and visa versa with the old flacon coils. The design is changed with an inside cage to hold the coil in place once inserted which is a difference from before and the clean look inside. 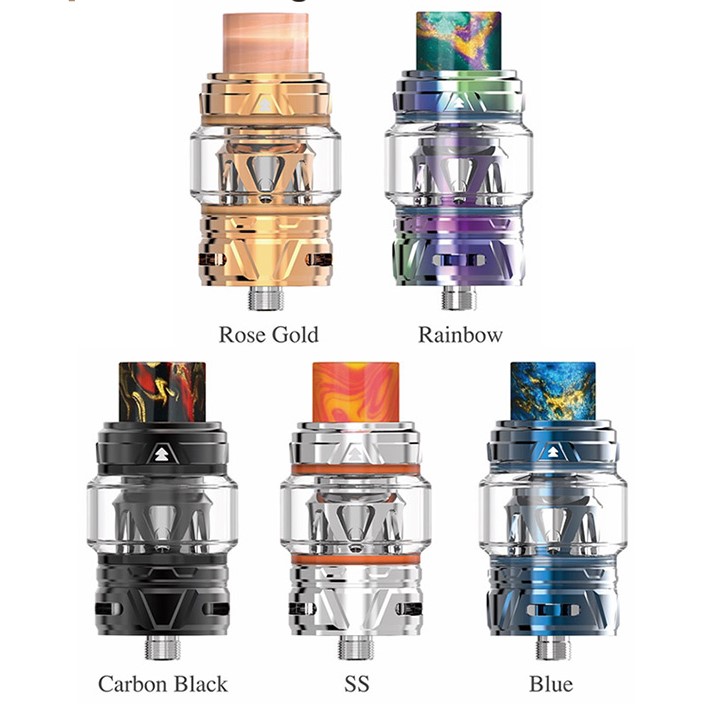 As you can imagine there was a massive amount of expectancy with the Falcon 2, after all, much like your favourite band releasing a new album you expect only the very best. Having a hands on with the Falcon 2, I can safely say that they haven’t improved as such, just changed what the best could potentially be…..

The first pro for this tank out of the box is the profile of the tank moving back to a smaller design despite offering the 5.5 mil capacity. The difference in size between the original and king was noticeable so seeing them return to the smaller tank design will please a lot of people who use smaller mods. The tank design is pretty standard in all honesty from an outside perspective, you have your standard tank design and make up. Even the inner cage style is not unique with other coil tanks adopting this look. The drip tip on top looks striking, although does stand out on the rose gold version I picked up. Filling is easy enough, with the tank not liking bigger hack-shot nibs but no issues with a smaller tip to fill. Be wary when using bigger bottles to fill but overall no issue there at all if you fill it slowly.

The next pro for me with this tank is the flavour, which will come as no surprise for anyone who has used the falcon before. The flavour is still exceptional but with a twist this time to justify the numbered sequel. The vapour is much thicker than the original which means you get a thicker vape at 65w or so and that means plenty more flavour in there as well. So the flavour is absolutely fantastic again from Horizontech putting it away from its original and most others on the market today.

The tank is light and would sit really well on a smaller device which is another pro for me, the issue with bigger tanks is that you are limited to what you can put them on. So having a smaller lighter tank with potentially bigger coils to come makes it universal almost with any device, which is a great feature for them to bring. The push in coil style is much easier than before, I found I had to remove the O rings from the coils to get them to fire in the original falcon tanks. So the push in style is much easier to replace coils with and the tank design means there won’t be a flood of leaking of liquid when changing. There isn’t a leak proof design here but that isn’t a bad thing at the best of times when wanting to change liquid. The vape isn’t too smooth as I have found with other push in tanks, with a little kick on the inhale you would hope for from your tank.

the first con for me with the tank, is that when I first started using it there was come issue with the coil. Now when I prime a coil I roll up the power bit by bit until I hit the recommended level and did so with this as well. However when first using the new sector mesh coils, I found the tank did struggle at first when pushing over 65w, despite the recommended being 75w on the coil. In time I did notice that went away and I was able to take it to 70w plus but at first it felt like the coils were over estimated quite a bit. So that is something to keep an eye out for when you pick this tank up, give it longer than normal to ease the coil in to ensure you don’t have any issues.

The next con I found was that the juice usage is a little bit higher due to the thicker of style of vape. More vapour produced means more liquid is consumed so the tank drained a little quicker then others. It is a fair trade off for a better vape, but it means the 5.5mil capacity feels a little smaller than it did before with the original. You will be filling this tank up more than before but hopefully you will be enjoying it more in the process.

As previously touched upon, the top fill is a little awkward to use especially with bigger nibbed bottles. You have to fill it up slower in that case so would be better distilling liquid into a smaller bottle before you take the tank out to speed up the filling process. There was only bubbling when using a bigger nibbed bottle so you won’t have too many issues filling it up, but worth mentioning none the less. 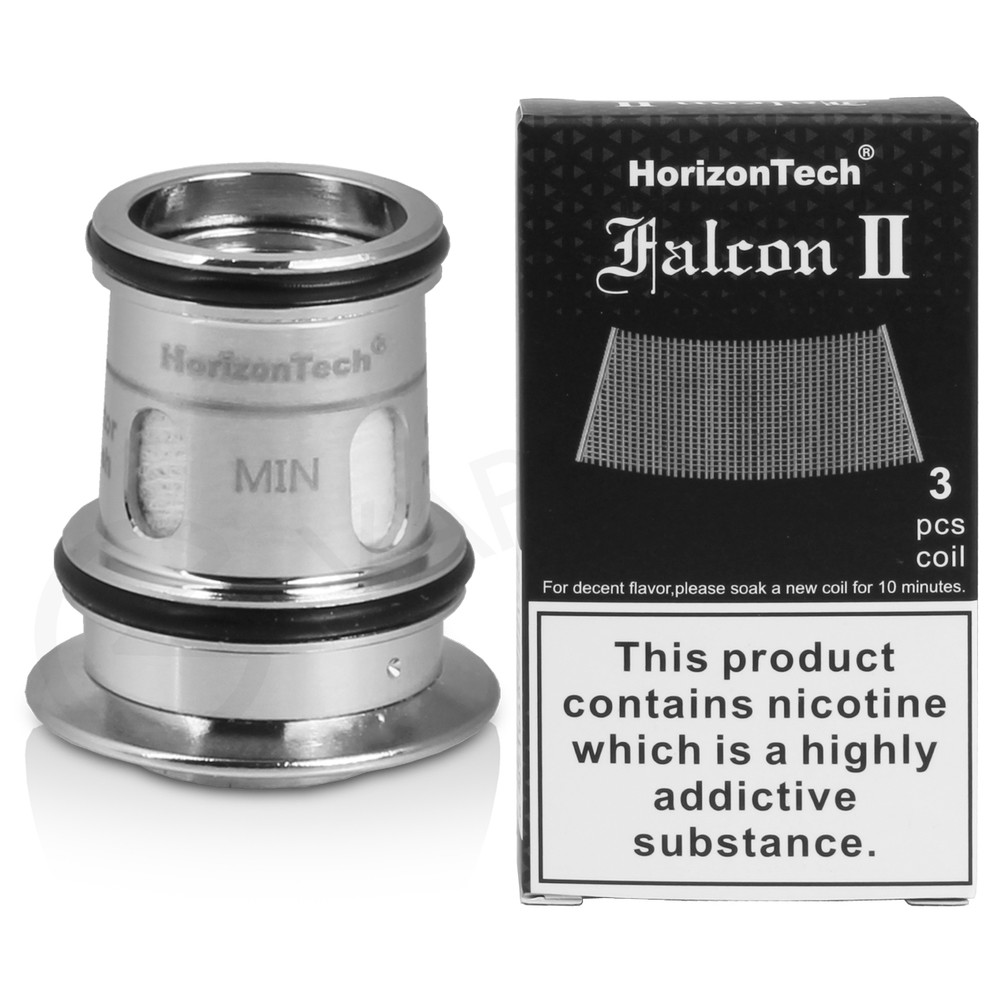 Honestly, I think the Falcon 2 is one of those odd releases simply as it doesn’t prove to be better than its predecessor, just better in a different way. The Falcon 2 may well have been served better with a different name as the overall make up of the tank is completely different than before. Offering a much thicker flavourful vape, new types of coils and easy to use means the Falcon 2 is simply one of the best on the market today. Horizontech’s dominance continues and they prove that the very best can be improved upon. Is it worth a purchase? Absolutely if you are using something other than a falcon now. In comparison, the original and king do have fantastic flavour and performance already but the Falcon 2 one ups pretty much any other tank on the market today, a must buy if you want the best flavour from your E Liquid.